“Champagne only comes from Champagne, France”

I’m not normally one to face-palm myself when someone sipping a glass of non-descript sparkling wine exclaims “This Champagne Is lovely!” – as it’s a common faux-pas most people make over their drinking life.

But as one becomes more discerning with their choice of tipple, the more savvy they become in defining drinks – and this applies to more than just bubbly.

Watch a whisky aficionado cringe when someone drinking a Sullivan’s Cove or a nice Suntory mistakes it for Scotch.

Watch a craft beer nerd ball up in a corner when someone confuses an ale with a lager.

It all comes down to having a good booze education – and much can be learnt from curiosity or simply by having a quality drinking buddy/mentor.

The use of the word “Champagne” has long been incorrectly used to describe anything bubbly – for most it’s easy and simpler to use off the tongue than “Sparkling Wine”. A great deal of media laziness also attributes to describing any bubbled wine as Champagne – even though there are many distinct varieties.

This is to the detriment of the governing body of Champagne – who try their best to ensure that the name only applies to the drink made in the Champagne region, to its specific laws and methods (which were established there). Its much the same as whisky – it’s not Scotch if it’s not from Scotland.

The work of the Comite Champagne has gone so far as to take entire wine growing regions to court – such as the Californian one that markets “California Champagne”, which although differentiated and descriptive is still… kinda dodgy.

Can you blame the Comite? Champagne is a luxury product – made so by long running ties to royalty and aristocracy that in some instances still exist today. Half of the appeal of drinking champagne is the perception of opulence – for some this is more important than the flavour of the drink itself.

We live in a world where marketing and misinformation are used to separate people from their hard earned cash – and the use of “Champagne” when describing events or services generally means top-shelf and this attracts punters. Issues arise when such an event or service doesn’t actually involve champagne, and many a law suit has been born from it.

So, while I’m not about to jump the bar and hold an open corkscrew to the neck of the next person who sips a Prosecco I just poured them and tells me its “lovely Champagne…” No, I will drop some friendly knowledge and hope it sticks.

Understanding the correct names by region is quite simple – here are a few simple rules.

The word Champagne is only to be used on wines from Champagne, a region in Northern France. It looks like this:

It has its own special climate (mostly cold) and soils which makes the grape flavours unique. It is also the birthplace of the Methode Champenoise: – a rule set which defines how the drink should be made.

The term “French Champagne” is redundant because its only possible for Champagne to come from France.

Other French sparkling wines – if they are made from the same grape varieties and in the same techniques as ones from Champagne (usually called Methode Traditionelle) – that are made in any other regions such as Burgundy, can be called “Crémant”. 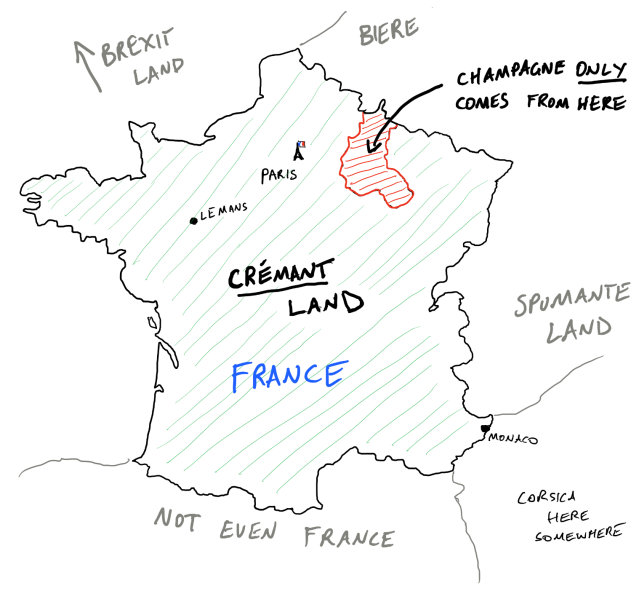 Bubblies made outside of France to the same techniques as Champagnes should be called “Sparkling Wines” or “Bubbles” or whatever – but NEVER, NEVER called Champagne. 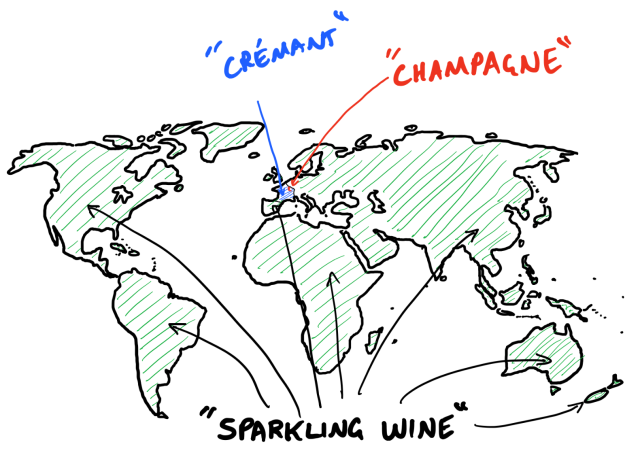 A great many other bubbly wine styles like Prosecco, Moscato etc. are named after the grape which they are made from – not a place – hence they can be made anywhere – like a Hunter Valley Moscato or a Barossa Prosecco.

If it’s not Pinot Noir/Pinot Meunier/Chardonnay only, it’s not Methode Traditionelle. Thus it has 0% chance of being labelled a Champagne.

If it is not double fermented and aged for a minimum of 15 months – its has 0% chance of being Champagne.

I’ll save Captain Obvious a trip: If all else fails – glance the bottle label first!

The laws of wine making means style and variety HAVE to be printed on the bottle somewhere.

For the record – this includes when you’re at a function and the waiter asks if you’d like a top of Champagne – and you spy the bottle and it ends up being a generic sparkling.

That’s not to say a non-champagne is going to be inferior, because I’ve had some that rocked my socks off (looking at you; Apogee) – but they are a darn slight cheaper – and the odds are you’re being cheated out of your bank balance (I know a true horror story of hosts paying for Champagne service at wedding rates and guests were served cheap Crémant without anyone knowing the better of it)….

But withhold from punching them in the face – a Tippler has class. Splash it in their face. 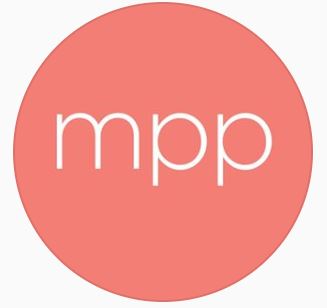 Check out our archives…